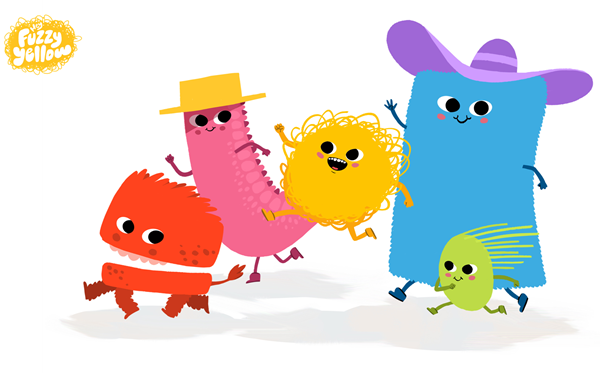 Hey Fuzzy Yellow! has secured financing and programming commitments from several international broadcasters and is planned to enter production this year. Additionally, pre-sales for the property will continue in February, when the series will be offered to international program suppliers at the 2023 Kidscreen Summit conference in Miami, an annual gathering of global programming services and content producers.

A spirited take on early childhood edutainment, Hey Fuzzy Yellow! promotes independent thinking and self-expression through exploration and play. The series, expressed in interstitial-style short-form segments, aims to serve preschoolers and their parents through comedic storytelling, upbeat songs and music, and practical lessons viewers can embrace as they mature and develop. Curiosity and Toon2Tango will jointly co-produce each installment, overseeing scripts, animation, music, and global distribution as well as ancillary opportunities commonly associated with hit preschool properties. Curiosity Ink Media’s growing footprint in Kids Entertainment began when it opened its doors in 2017, prior to being acquired by Grom Social Enterprises, Inc. in 2021. Curiosity’s co-founder, Russell Hicks, previously served as President of Nickelodeon original programming and is widely credited with helping to usher in iconic global powerhouse entertainment brands including SpongeBob SquarePants, Dora the Explorer and Paw Patrol, among others.

“We are thrilled to collaborate with internationally acclaimed Toon2Tango to bring this series to life for a global audience,” said Russell Hicks, Chief Content Officer of Curiosity Ink Media. “Each episode will be developed and crafted to bring fun, excitement and catchy songs that grownups will love just as much as their preschoolers. Hey Fuzzy Yellow! is a series for younger kids that invites parents and caregivers in for a one-of-a-kind co-viewing opportunity rarely seen in programming today.”

Curiosity’s ongoing collaboration with Toon2Tango builds on their expansion into original IP franchise properties, the thrust of its storytelling catalog. Toon2Tango, the Munich, Germany-based production company and specialists in development and distribution of kids’ and family content, enhances their global reach in animation production and brand building. In addition to Hey Fuzzy Yellow!, the collaboration also includes cultivating another preschool property, Baldwin, to market as well as teaming up to create Santa.com, an original holiday animated feature film inspired by Grom and Curiosity’s holiday-centric ecommerce and editorial site, for theatrical distribution.